The Art of Aromatherapy 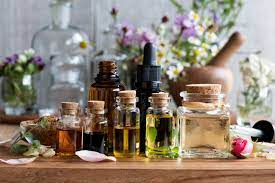 ​Aromatherapy, often known as essential oils therapy, is the practice of treating disease with the aroma-producing oils (essential oils) produced by plants. Flowers, leaves, stalks, bark, rind, and roots of plants are used to extract essential oils. The oils are combined with another material (oil, alcohol, or lotion), then applied to the skin, sprayed into the air, or inhaled. The oils can also be massaged into the skin or poured into bathwater. Aromatherapy as we know it now has its roots in Europe, where it has been practiced since the early 1900s. Aromatherapy may aid in relaxation and stress relief. It's also been used to treat burns, infections, depression, sleeplessness, and high blood pressure, among other physical and mental ailments. However, scientific data supporting claims that aromatherapy effectively prevents or heals illness is sparse.
​​Aromatherapy has its origins in prehistoric times when juniper berries were employed as an antiseptic and food flavor. Plants and herbs have been used for medical, gastronomic, and cosmetic purposes by cultures for generations, according to evidence. During the mummification process, Egyptians utilized plant resins and oils. Embalming was done with myrrh, and jars of Frankincense have been discovered in graves. Juniper, Frankincense, Myrrh, Lemongrass, and Cardamom were among the fragrant oils used in Kyphi incense. Frankincense, Benzoin, and Myrrh were so valuable that they were valued more than gold in some circumstances. Aromatherapy has been utilized by humans for thousands of years. Aromatic plant components were used as resins, balms, and oils by ancient cultures in China, India, Egypt, and other places. These organic compounds were employed for medical and religious purposes. They were thought to offer bodily as well as psychological benefits. The Persians are credited with inventing essential oil distillation in the 10th century, while the practice may have existed for much longer. Essential oil distillation information was first published in Germany in the 16th century. Essential oils were first identified as a treatment for sickness by French physicians in the 19th century.
​​Plants and herbs have long been utilized as a medicine in China and India; Chinese physicians employed Sandalwood to treat cholera. The oldest record, known as the 'Yellow Emperor's Book of Internal Medicine,' is over 2000 years old. From herbal medicine to Shiatsu, Chinese medicine is still practiced all over the world today. Ayurvedic medicine, or traditional Indian herbal therapy, aims to cure the whole person - body, mind, and soul. Sandalwood was used to cure wounds in India, and it was also burned for exorcism rites, according to history. The Egyptians taught the Ancient Greeks a great deal about the use of plants in healing.Hippocrates, a Greek physician, utilized Chamomile to treat fevers and suggested a daily massage with aromatic herbs for overall health. Galen, another Greek physician, suggested using Cypress to treat gastrointestinal problems. Avicenna, a Persian physician and philosopher, discovered the method of distillation during the Middle Ages. Not only is he credited with making significant contributions to both past and present medicine, but he also wrote thorough instructions on massage and the use of herbs and essential oils to promote good health. Returning from the Crusades, European knights brought back knowledge and the benefits of using plants and herbs to treat diseases. Rene Maurice Gattefosse, a French chemist and parfumier, was working in his laboratory in 1910 when he burnt his hand and plunged it in a vat of lavender oil, rediscovering lavender oil's curative qualities. Following that, he used essential oils to heal soldiers in military hospitals throughout World War I. He began researching and experimenting with essential oils in 1928 and published his findings in a scientific study. The term "Aromatherapy" was first used in this context. During the Indochina War, another scientist, Dr. Jean Valnet, continued his research into the antibacterial and therapeutic effects of essential oils by utilizing them to treat war wounds. Aromatherapy was established as a result of his work.
​​The Art of Aromatherapy and the use of essential oils in everyday life is embraced by many across the globe. The holistic healing treatment uses the “essence” of plants, flowers, and herbs, known as essential oils; to improve physical, emotional, and mental wellbeing, enhancing our body, mind, and spirit. Karl Murray, Founder, and Director of Kotanical were studying Kinesiology when he discovered the therapeutic power of essential oils. During his training, he noted how people’s relaxation levels increased with their usage during muscle testing. His Thai boxing club used a peppermint and eucalyptus ointment to enhance the team’s performance – and, when he injured his wrist after a fight, he used it to help him recover.