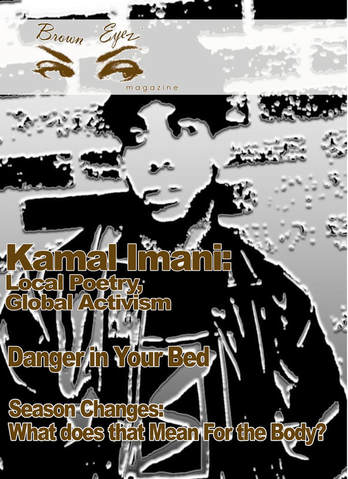 ​B-E-M: How do you define Healthy Living?
KI: We should feel happy every day. There should always be a joy within, but in addition to that physical pain and discomfort makes it harder to embrace the joy within or the inner voice and silence of the spiritual life but we have to. So I do whatever I have to strive to eliminate disease and bacteria. I’m currently doing a lot of juice types of fast as well as drinking herbal teas such as Echinacea, always ginseng, honey, chamomile to relax, limes and lemons to cleanse. I have a mid-range goal of becoming a vegan/fruitarian. I do my best not to eat any red meats and if chicken or turkey it should be organic, but the way the market or industry is now, there are too many chemicals, viruses and poor standards for the animals. It’s not like it was back in the day down south, in the Caribbean or Africa.

I take an herbal bath daily with aroma therapy. Scented candles, incense and burning sage. I’m also working on Feng Shui. None of this is coming easy, but I’m determined to get to a very natural way of living.
I really want to leave city life and be surrounded by nature as well. The most important thing is oneness with the Most High and listening to the inner voice.


B-E-M: What are some things you do to keep yourself healthy?
KI: My herbal bath is very transformative and it’s something that I didn’t plan but as I became more involved in this matrix I noticed the transformative effects. I chant OM and always do affirmations. I do a lot of creative visualization as well. I pray and give thanks for life in the morning and evening, while driving and working. I really started loving SILENCE. I sometimes believe I could be like a Tibetan Monk. I love to read about spirituality. It soothes me and I feel the presence of the Most High. I can be anywhere and forget about my surroundings when doing so. I do some meditating as well.  I strive to put spirit first. The rest of this stuff is beginning to look real funny to me. When I say stuff I mean the rat race and people trying to play games with each other and hurt each other. It’s really silly. Many of us have succumbed to western cultures materialism, individualism and narcissism when aboriginal and African communalism kept most things in balance and equality to the best of my knowledge. It’s better to share and keep energy and wealth rotating in a circle like other ethnic groups do instead of trying to be the number 1 individual.


B-E-M: What is your religious/spiritual affiliation and how does it influence /affect your work?
KI: At this point in my life it’s hard for me to put a label on myself although I think it would help me focus a little more. I’m attracted to Sufism, Khemit and Rastafari after years of experience and “insperience” with the 5%, NOI, Shrine of The Black Madonna, Africentricity, Jehovah’s Witnesses and the Black “Chuuch” (lol).
My father is a Jehovah’s Witness, my Mothers side is Methodist and Baptist, my Grandmother was very universal. She had a Japanese room in her basement with a lot of Buddhist statues and furniture, but she was also Methodist and a secretary for the NAACP in NYC.  So somehow the Creator allowed me to go through many experiences to find myself just at peace with the God within.


B-E-M: What is your ethnic background and how has it influenced your music?
KI: I am an African in America with Blackfoot and Cherokee in my family tree and some Irish slave master somewhere (I want to get deeper into the finding of my roots as soon as I can) I attribute this make up to my fighting spirit. I’m cool until you cross the line aiight?
Our Black and Brown or Red culture is a culture of trance, truth and ritual. Also oneness with nature. When I write and perform I like to go into trance and black out. Sometimes I have to watch my energy so I don’t scare the hell out of the audience. Even promoters tell me to take it easy. But, when I have that real pro black revolutionary afro-centric audience like at Medgar Evers College in Brooklyn, it’s off the hook. Give me some African drums and watch the brother float while performing. Fun!  I like to teach and make people happy.

B-E-M: How long have you been doing poetry and performing in general?
KI: I was writing poetry for the little girls down south when I was about 7 years old. Some of them were about 13 and where fast so that use to scare me. Playing house and doctor (lol). My cousin caught us playing doctor too, but that’s another story….anyway (lol).
My grandmother used to give me poetry anthologies to read when I was about 7 and I would read Nikki Giovanni, Amiri Baraka, Sonia Sanchez, Clarence Major and many others. In my late teens some friends introduced me to the Last Poets and Kool and the gangs produced “Players Convention” where spoken word got instilled in me even deeper.
I was in several hip hop crews when I was 15 on up until about 23 and we would get paid to perform at house and school parties and battles because of our magnetic popularity locally. We were part of the 5% Nation of Gods and Earths and we even did a house party for Muhammad Ali’s daughter in Teaneck NJ.
I’ve performed at the Nets Game a few years ago as one of NJ’s Most Talented, Princeton, Hampton, Farleigh Dickinson University, The Nuyroican, Gumbolive in Springfield Mass, Poetry Realm in Bridgetown CT and of course The Bowery Poetry Club when Ms. P.J of Brown Eyez Magazine promotes the Vegan diet and reggae poetry soul vibe. Lovely.

B-E-M: What community service projects are you involved in?
KI: I help out wherever I can with the works of the Technology Resource Center/Khepera Center in Englewood NJ which houses events by and offices of Dr(s) Leonard and Rosalind Jeffries (Khemitologist/Nationalist), The NOI, African Medicine Women, BWARE (Black Women Against Racism Empowered), Mary K, Circle of Colors (business network) and which I co-host the open mic with Eastern Philosophy, PJ and Donna Bruce.

B-E-M: What projects would like to see in your community?
KI: I’ve been thinking about starting a rites of passage program by joining on to my friend Andrew Keaton aka DJ Ak Soul of Springfield Mass who has one for young brothers and another for the young sisters. When time permits I hope to do that. We need to teach the youth. That’s what it’s all about. I feel like the park preacher because when I take my 2 year old son to the park after school every day I find myself correcting the youth using the n word not as a term of endearment but I see self hate there. Also, the B word and doing all kinds of lewd acts out in public.

B-E-M: What advice would you give upcoming artists?
KI: To create your own and join onto others positive networks. With technology you can be your own record label, manufacturer, distributor and promoter. Find a niche market. If its’ women, men, college students, backpackers, Latinos, Asians etc… have a focus market.  Also, don’t wait for anyone to do anything. Keep coming up with creative ways to promote yourself and use all of your resources. I don’t care if you have to make black and white 8 by 11 flyers to give to people with your website on it. There’s always something you can do to promote yourself.

B-E-M: What plans do you have for the future?
KI: I’m in the process of letting the spirits guide my new untitled CD (lol). I have so many “conflicting” types of poems and ideas that I’m not sure what it’s gonna look like when it’s finished, but it will have thought provoking depth and some party joints too. It’s gonna be weird and unique. Very creative.
I want to keep promoting my radio show on Vocalized Ink.org, put together some big concerts with artist that I have happily met and performed for. I believe I will be lecturing soon. I study so much metaphysics, history, social issues etc…that I’m about ready to speak to uplift as well as dialogue and learn with people in conventional and unconventional settings.

B-E-M: Talk about the Lynch the N word experience and what happened with that.
KI: Like KRS One said “This is just one style out of many, like a piggy bank this is one penny”. I have many styles and subjects. This was just one that I wrote a couple of years ago based on a real experience of  a brother who really didn’t know me calling me a nigger. About 5 months ago my friend Jonathan Lloyd of Newblackmusic.net was getting fed up with hearing the word too much everywhere he went by youth and people that don’t understand it’s origin and negative psychological effect it has on out disunity and asked me if I had something for his “Lynch the N Word” documentary. We taped it one day in Brooklyn NY and put it on myspace and Youtube and in a few months I noticed I had 15,000 hits and at least a racist comment every other day it seemed like from some white boy and I was like “I’m not even talking to them, I’m talking to us”. They are saying things like you monkeys should be glad we brought you here because Africa is so decimated. You make money here and have the good life” and “you work for my father” and “you probably don’t have an education or a job you black nigger”. I would nicely reply “thanks for showing your true colors”etc… but then a few of my people including brother Jonathan was like no we got to make a response. A few brothers were happy with using the N word and doubted if anything would change as well so I made a part 1 for the white racist and a part 2 for the black complacent ones. There up on youtube. I broke down how they are using projection to scapegoat us because they innately feel that they lack something that we have.
I broke down how the Austrian geneticist Gregor Medel determined that the Black germ is dominant and the white recessive. I mentioned how the Anthropologist Leakey found “Lucy” the so-called oldest remains of humans in Kenya. In other words, we are the original people of the planet earth.

I haven’t heard too much more from the haters. I told them, in the words of KRS One “that’s it no more battling, you’ve been takin out” revolutionaryart productions.

B-E-M: How do you think your work can affect the community when it comes to the N word controversy?
KI: I hope it will make people think before they use it and that it will open up discussion that will lead to its true historical intent and purpose which was to keep us feeling inferior and subjugated. People keep trying to make pretty new meanings for it, but no, let it remind us of the Maafaa or African Holocaust of Enslavement and never forget our sojourn, purpose and history just like the Jews, Japanese and every one else doesn’t forget.
You can’t call anyone a spic, hymie, chink or anything else, so why is it alright to call us N. It’s just like they tell us to forget about the past in terms of receiving reparations. How come the Jews, Japanese and Natives can get it but not us?
Powered by